Aram Saroyan is a writer whose work encompasses novels, plays, essays, and poetry. He is best known for his minimal poems, which represent much of his output in the 1960s. Audaciously concise, often comprised of a single word or its reimagining (e.g., “lighght”), his minimal poems received acclaim (and prize money) from the literary community as well as consternation from conservative detractors, Ronald Reagan among them. His eponymous 1968 book, published by Random House and consisting of 30 of these poems, was read in its entirety on the NBC Evening News. These minimal poems have always operated at the threshold of the literary and art communities, appearing in anthologies of concrete poetry or adjacent to conceptual art in publications such as Vito Acconci and Bernadette Mayer’s mimeographed magazine 0 TO 9; they have received renewed interest and attention in recent years, starting with the publication of his Complete Minimal Poems in 2007, which received both a rave by Richard Hell in the New York Times Book Review and the William Carlos Williams Award from the Poetry Society of America.

Saroyan has long worked in close proximity to the art world, and sometimes squarely in it—as a teenager he apprenticed for Richard Avedon and trained under Hiro, later publishing his own photographs; he frequented Warhol’s first Factory, where his friend Gerard Malanga worked at the center of the hive; his portrait was painted by Alice Neel and Alex Katz—but his breakthrough was in poetry. Paralleling contemporaneous concerns in visual art in the 1960s from Andy Warhol to Donald Judd, many of Saroyan’s minimalist poems are about the space between and around the word almost as much as the words themselves. Take, for example, the word “night” repeated over and over again as a horizon line spanning a full spread of an open book, or the lowercase letters “t,” “i,” “n,” and “y,” all assertively distributed around the margins of a page—a “tiny” poem that nevertheless claims all of the available space. Space is, in these poems and in the present drawings too, an essential dimension.

Thus, for those who know Saroyan’s writing, and especially his minimal poems, these recent drawings should not arrive as a complete surprise. They are not a new turn, precisely, but rather an ongoing elaboration of the page (and, inevitably, its limits) and an exploration of a line that is no longer constricted by the typewriter.

There are also drawings—I mean drawing drawings—dating from the late 1950s, when the teenage Saroyan spent a bored summer with his father, the writer William Saroyan, in Paris. Smaller in scale, these initial drawings in many ways prefigure the present body of work. He has claimed Paul Klee, Bradley Walker Tomlin, and Brice Marden among the influences on the current work. (Worth noting: the young Marden screen printed an edition of five of Saroyan’s early one-word poems in color in 1965.) Tellingly, in a 2001 essay Saroyan recalled the slow evolution of his appreciation of Serge Poliakoff, whose abstractions he encountered in that yawning Parisian summer:

“Today I wonder whether my father instinctively hadn’t allowed us to be a little bored, for that situation yielded an unexpected dividend for me. Before our arrival, Pop had met the Russian émigré Serge Poliakoff at a party, and he had a small book of reproductions of his paintings on the living room coffee table. I immediately opened it and began exclaiming at what I took to be the simple-mindedness of the works. They were abstractions of richly painted, solid-color, puzzle-like forms, and seemed to me pointless. I would remark on this virtually every time I opened the little book, which remained on the living room table throughout the summer. After an initial shrug, Pop remained uncharacteristically quiet and non-committal when I made my regular denunciation. Then, toward the end of summer, something happened. Having opened the book again and again, something in the work began to engage me. The puzzle-like forms now communicated an inner equilibrium, a visual serenity that satisfied me deeply.” (Aram Saroyan, Starting Out in the Sixties)

Saroyan’s new drawings have an immediacy and buoyancy that bring to fruition the seed of their smaller scale Paris precursors. They have an inner equilibrium, even when in the act of their making they push toward potential instability. There is also a lack of pretension and fuss, due at least in part to the familiar quality of the lightfast markers he employs here. He’s an autodidact, but hardly a naïf. Much like his exquisite early visual poetry, these drawings combine the artist’s characteristic equanimity with his exuberant sense of discovery. 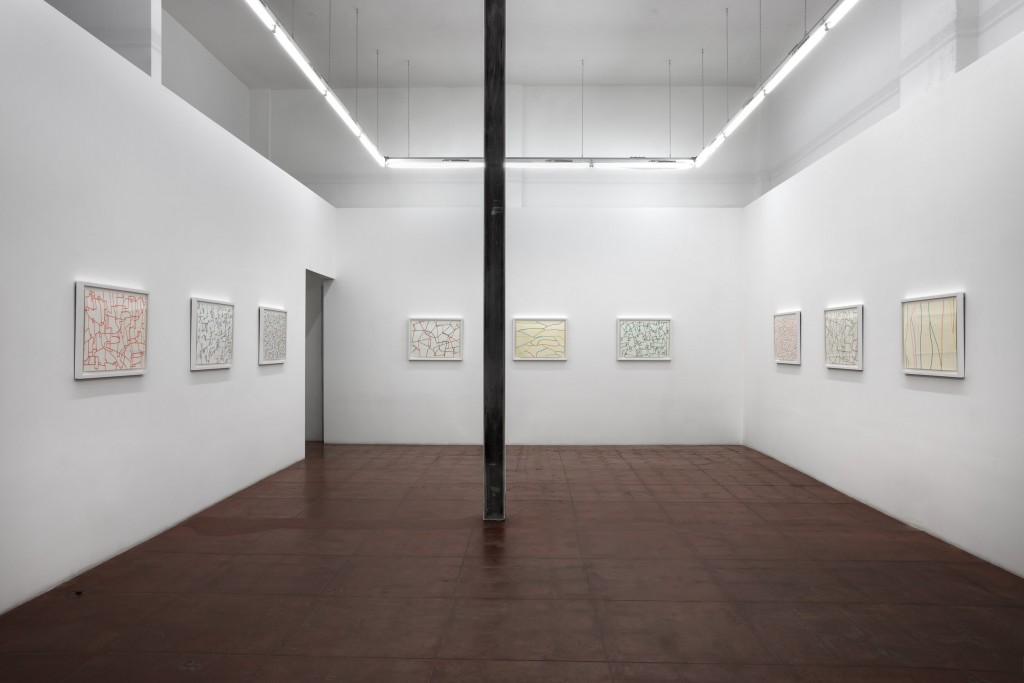 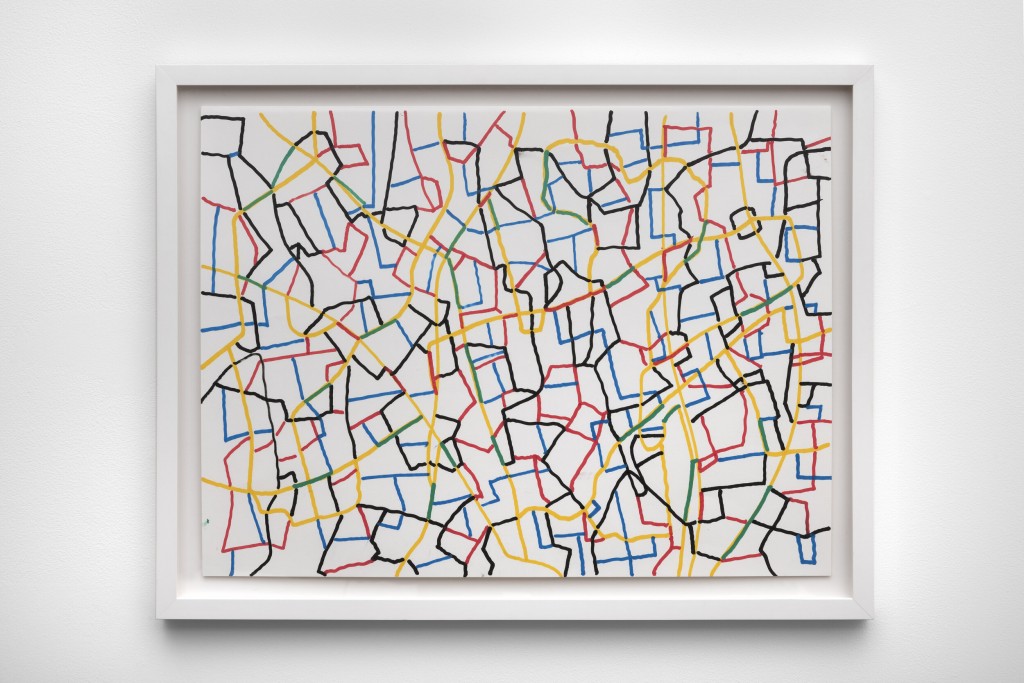 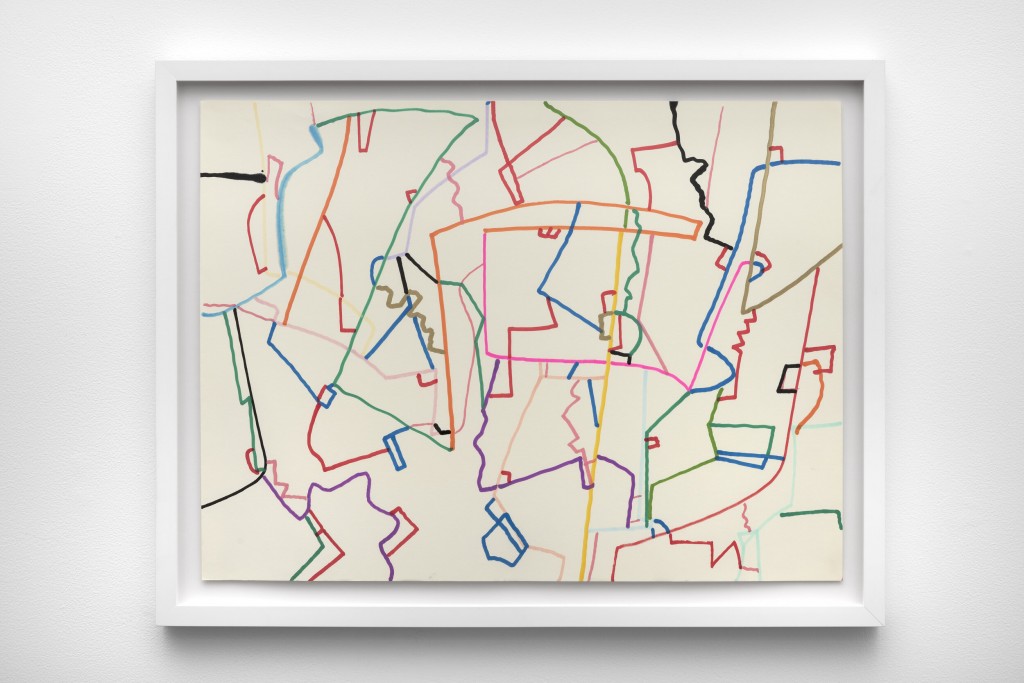 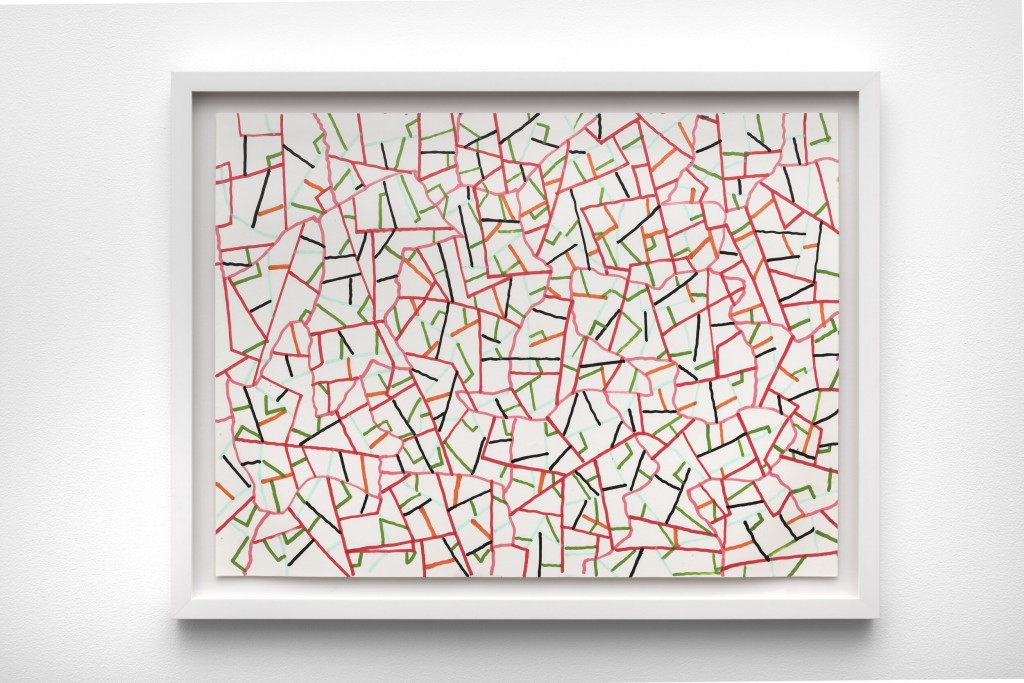 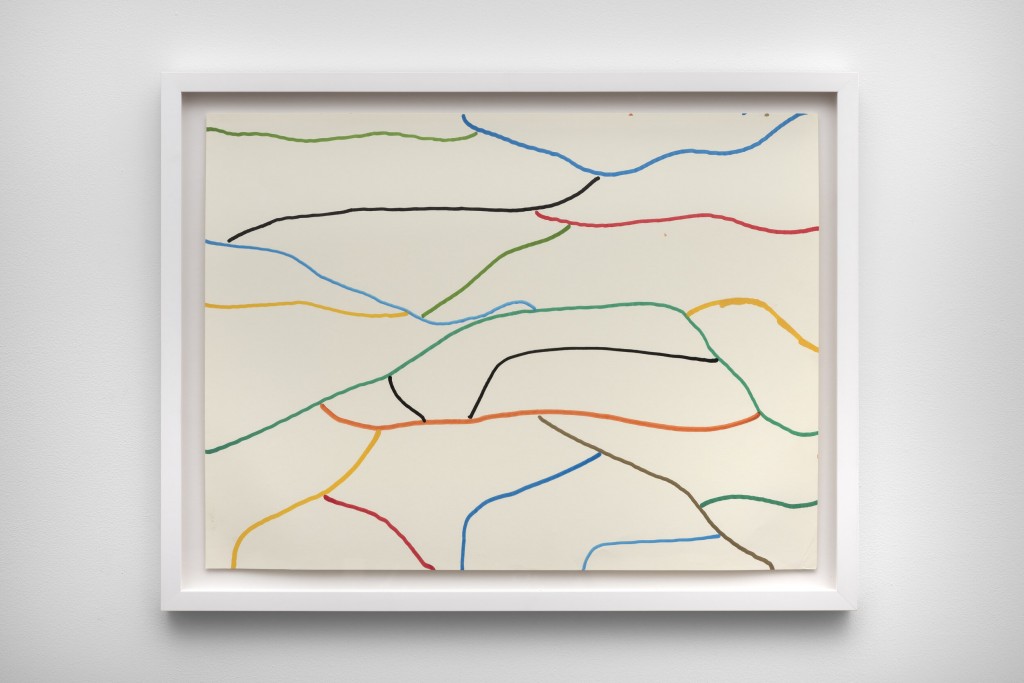 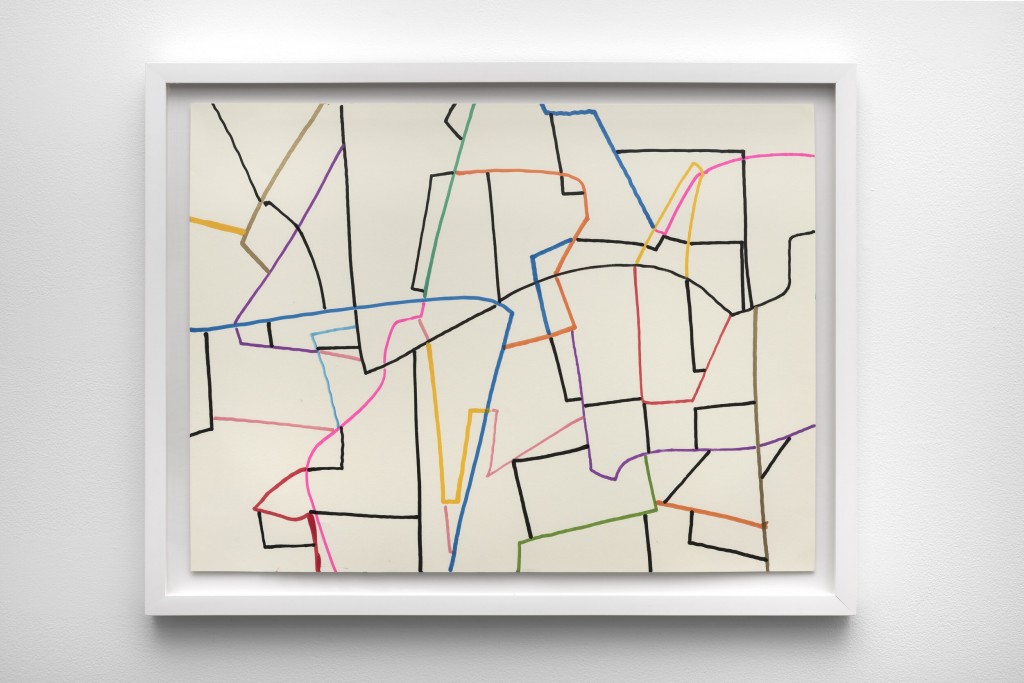 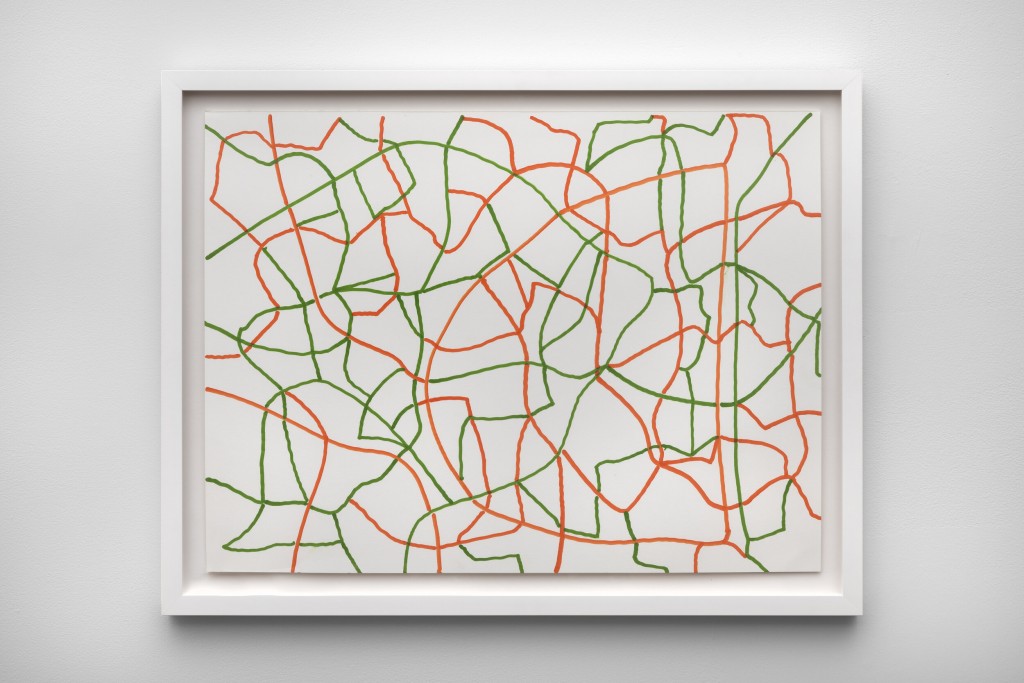 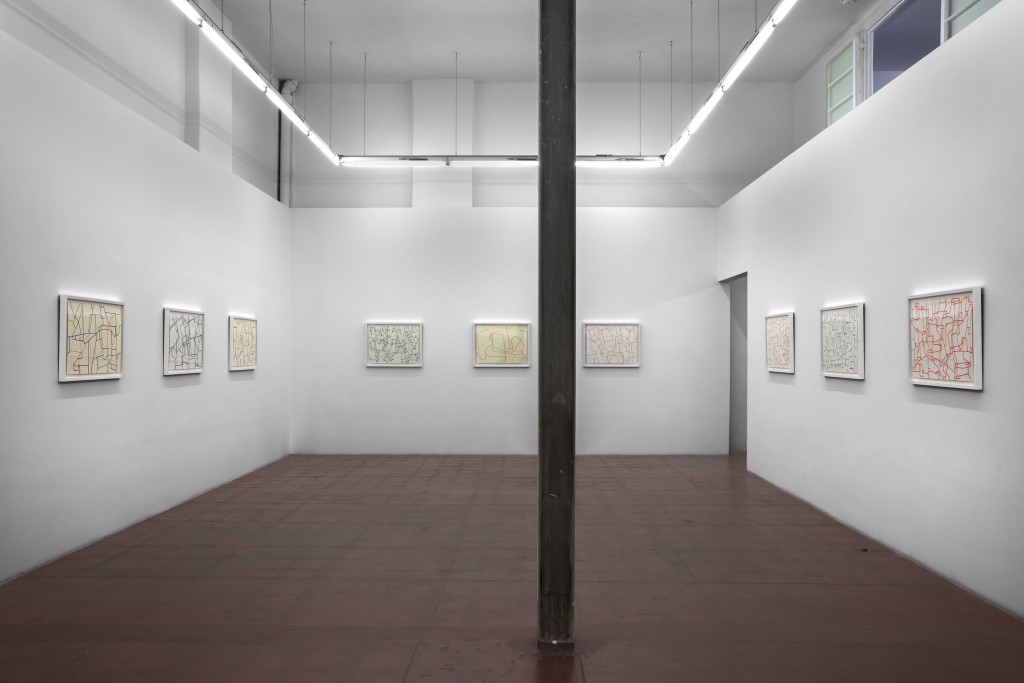